A new project has been added to the sidebar after consuming a number of days of my time. fitbitd lets you synchronise a FitBit tracker using a Linux machine, because I grew tired of firing up a windows virtual machine to do so. It also features an indicator to show trackers that have been seen recently. It’s pretty early days, but is functional enough to be useful now. 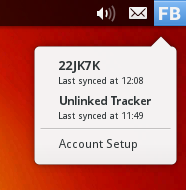 So… if anyone arty feels like drawing some icons (disconnected, idle, synchronising) to replace the monstrous FB letters I’d be very grateful! It’d also be nice to get it packaged for ubuntu - it’s been a long time since I looked at debian packaging and frankly it’s terrifying!